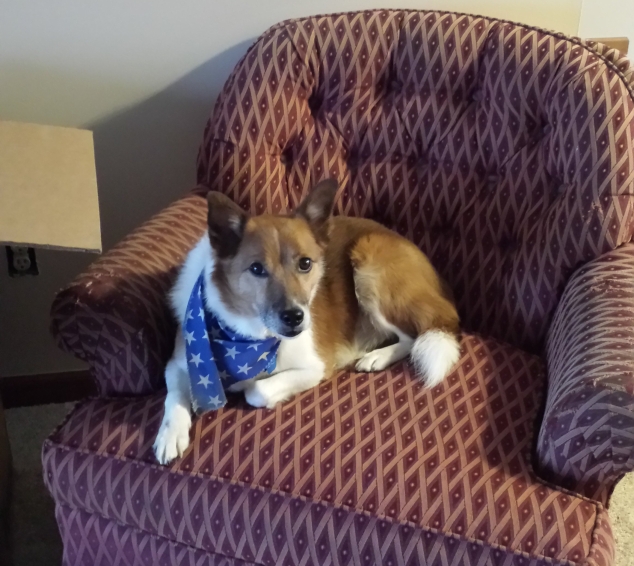 Did I think I knew loss before this?

I thought I was inoculated to grief. Like many vaccines, I knew I wasn’t perfectly guarded against this sort of despair, but had a special sort of resistance after losing 10 babies through 8 pregnancies at varying gestations.

We then had to put our dog to sleep this week.

Our dog, William Wallace (a misnomer, we always joked, as he was afraid of rustling grocery bags and large domestic cats), was roughly 9 and was stricken with an aggressive, metastatic cancer so quickly I’m still left wondering, “Is that it? Is that really what happened?”

Now, mind you, I’m an old hand at medical research. You don’t get, “Sorry, it’s unexplained why your babies keep dying in utero” after a million tests and not get savvy. And my sister is a vet out of state. So we went in again armed with knowledge, armed with as many alternatives as we could be.

But there was no good prognosis. If this was a maybe rare fungal infection, the treatment and outcome were just as bad. He was still given the recommendation for palliative care. His condition progressed very rapidly though.

One week we were taking him in for the booster for the canine flu vaccine. The next week, we took him in because he was eating a bit less and occasionally had some rapid breathing and were given antibiotics in case he had picked up the bug while we were in there the week before.

A week later we had brought him back in, prior to even his follow up appointment, as his breathing and eating had gotten worse. X-rays showed us metastatic cancer, and there was nothing we could do. After a sleepless night hoping he wouldn’t die in terror from suffocating and calling as far as 2 hours away for specialists, we had him see another opinion (while my sister shopped his case around at her own veterinary hospital). All recommendations, including my own sister’s, were to let him go peacefully. Which we did.

But now I’m left here grappling with the many complexities of grief.

There are a host of articles and studies validating the loss of a pet, particularly a dog. We know that humans group dogs cognitively in the same place as their children. Which is why this grief, this animalistic sobbing and despair, is so familiar and so hard — and now even harder because William Wallace was with me before, during and after the losses. And now he’s gone too.

There was a particularly hopeless moment when I uttered, “Now I’m losing my first baby.” And also, as we watched our one living child — a 2 year old obsessed with both dogs and babies, both of which she now has neither of in her life — say goodbye before we took him to the vet, I felt my chest seize with the reality of how alone she would now be, as even her “baba” was gone.

I also struggled with the medical grief, the same, “If I had just pushed for this test” or “If I had just been more consistent on his glucosamine pills.” Every professional assured us that no, he was of the age when things do happen — and even then, they’ve treated puppies with the condition. No, there wasn’t anything we could have done probably as this clearly moved so quickly that it was apparently a miracle he even made it to the point that we could choose a humane death for him.

But I know that second guessing. I wrestled with, “He always had that weird cough,” that vets had always told us was a result of his odd habit of self grooming, much like a cat. “He did occasionally have some rapid breathing,” which vets also said was likely a breed inherited issue, as his snout wasn’t super long. He had been lagging on walks a bit — but he also was getting older. And his age was always a guess, as he was a mixed breed from a rescue. We had always assumed he was an older puppy around a year when we got him, but maybe he was a little older?

So, so many things I questioned. In the same ways I still grapple with, “If I had just pushed for the progesterone” for a loss in November 2017 that seemed to be going stronger and longer than other failed pregnancies, knowing full well that progesterone is unlikely to do anything; or when I wished I had followed up on that wonky sperm analysis my husband got the month before that, instead having two more losses before finally pushing for further sperm testing which finally gave some sort of explanation to our “unexplained recurrent pregnancy loss.”

Which brings me to my husband.

“We always fed him so healthy, and we gave him so many walks,” he sobbed at one point. We have been together 10 years and I’ve only seen this level of tears or sorrow in him 4 or 5 times, including now. I looked at him sadly, a man who didn’t grow up with family members suffering longterm with cancer and who didn’t lose any grandparents until adulthood. A man who had ignored what 2 years of constant miscarriage had showed us.

“That’s not always how it works. Anyone can get cancer, regardless of health or age.”

Inside my mind, I was thinking, “Anyone can lose a pregnancy, regardless of health or age.”

But truthfully, his grief was a complexity all its own. We had differed dramatically in how we handled our losses — I, the victim of the D&C or the night of contractions or the holding of a gestational sac, often dealt with the same heaving sobs after these occurrences as I did when our dog died. My husband never cried, and often seemed neutral after the miscarriages. As research into our losses pointed more and more to a sperm issue, he at times became even hostile to my reactions to the losses. As a result, the moment we knew our dog’s days were numbered, I felt myself tense — used to not being able to express my grief.

But this was a new grief, a different one. We had adopted William Wallace together, shortly after I moved in with him back in university. We had taken him on vacations, done hundreds of miles of hikes and backpacking with him all over the state, and had referred to him as “the baby” until our first (and only, so far) living child was born. Even then, we referred to her as “the puppy” when we explained to William Wallace what was happening during my pregnancy (though I’m sure he figured it out).

So my husband has been sobbing sporadically, much as I have, the last few days. And when we finally put William Wallace down, I was as gripped by my own emotions as his while he flung his arms around me and hugged me, constantly kissing and rubbing my hair. In his despair, he was also seeking solace and comfort in me at the same time he was sharing the grief with me. I was startled. I even thought briefly, “Did William Wallace do this for us?” Leave in this way to finally get us to see eye to eye in grief, after years of him hiding behind the couch when we’d yell about the losses, the medical costs, our emotional contrasts?

Returning home, I began to analyze, too, why our reactions to the lost embryos and fetuses might have been different. I specifically wanted a paw print memento that our vet clinic offered; I wanted him cremated and home with us. My husband didn’t see the issue in taking his body and burying him in our yard. Burying was not the issue to me, but I desired something to hold. After having nothing tangible for our many babies other than pregnancy tests and some ultrasounds (and a persistent blood stain in one set of sheets), I wanted something from our first baby, the four legged one.

But once we got home, I took to our daughter and talked with my mother who had watched her. My husband quietly and steadily rid the house of any trace of him. Before I realized what was happening, no dog toy or stray piece of dog food was in sight.

“Let him do this. This is what he needs to do,” my mom said when we saw him enter the garage with a handful of leashes.

I was not particularly upset by any of these actions, but suddenly I realized why I had never found the solace I needed in the arms of my husband before this. His coping was just dramatically different than mine afterall. Perhaps, not like I had thought when he uttered occasionally cruel comments, he did have some attachment to those pregnancies. Perhaps his dealing with grief was erasing the hurt.

Where he moved a box of pet items immediately to a hidden away place outside the home, I slept with my hand resting on a stuffed animal of our daughter’s, one that was the same size and color of William Wallace (and I often humorously thought was him if I wasn’t paying attention). Where my husband cleaned away traces of dog hair, and finished scrubbing the stains of bowel accidents that had let us know WillWall was facing his final days, I looked for necklaces to hold the ashes of him because I couldn’t bear being without some feeling of him.

And while I’m happy that we then spent an evening looking at pictures of William Wallace until we fell asleep crying (and I had even said, “I’m glad we’re doing this. I was so worried you wouldn’t want to.”), the devastating passing of our beloved dog has helped me see that my husband and I were never going to see eye to eye on grief because we just grieve differently. He was mentioning whether we should find a new dog for our toddler before William Wallace had even passed, while I was already feeling solidly that I would never have a dog again (we know we might feel differently in time, as the grief is still fresh, and my husband admitted he doesn’t think he could ever go through this again — while I have since looked at shelter websites, aimlessly searching for a panacea).

And there’s nothing wrong with grieving differently. I know we all express things differently. I guess in the deep sadness I feel at every waking moment (and there have been moments where I have woken from sleep, desperate to return to the nothingness of REM so that I could ignore the cruel silence that now fills our room at night), there is the slightest bit of relief that this grief brought my husband and I together rather than apart as our miscarriages did.

We drove past the clinic where we put him down the other day and my husband reached over, silently gripping my hand. He understood and felt the same. It’s all I had ever wanted in my moments of grief.

Now I just have to wait for the time and numbness to settle in as it did for my losses. But where I had either weeks or months to get to know the brief beginnings of those babies and took roughly as long to get over each one, I have nearly a decade of jingling collar and pitter patter of nails on hardwood to forget. And for now, the silence makes me grieve all the harder.